I can still remember the stupid talk Mommy and Daddy did with me AGES AGO..and now things are even WORSE then I thought it was gonna be! They lied It’s so not fair! And its all FAHRA’s folt anyway! She just crys all the time and I haer it at nit nd can’t sleep 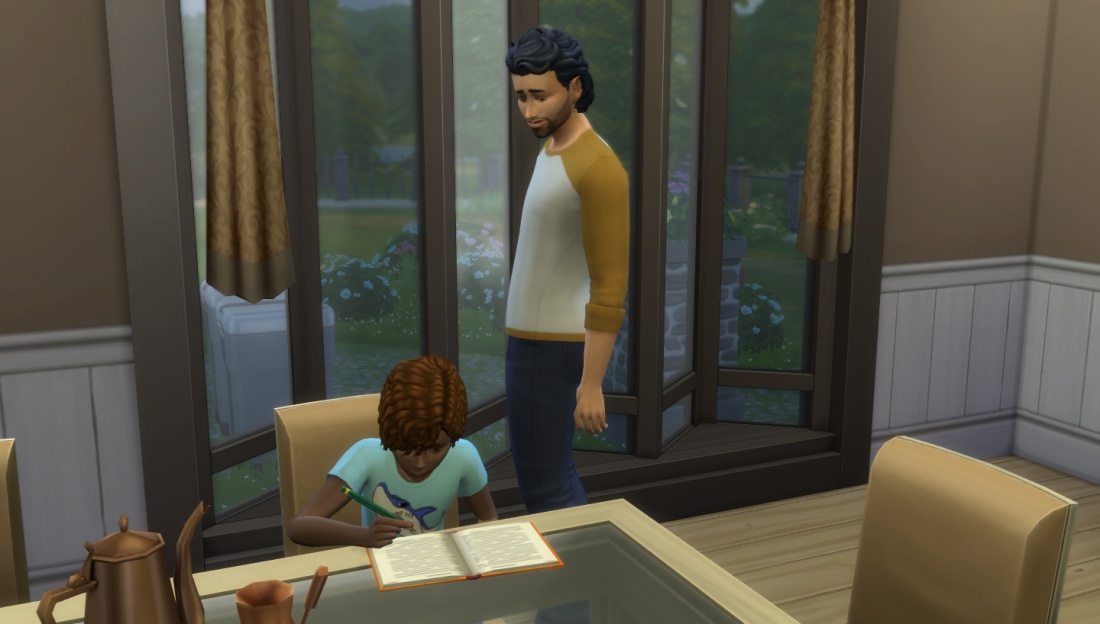 “Hey bud.” Lachlan came up behind his son and ruffled his hair. “How are you doing on the homework?” He looked over Elias’s shoulder and tried to make out his large, messy scrawl. Kid’s only six after all, he thought. 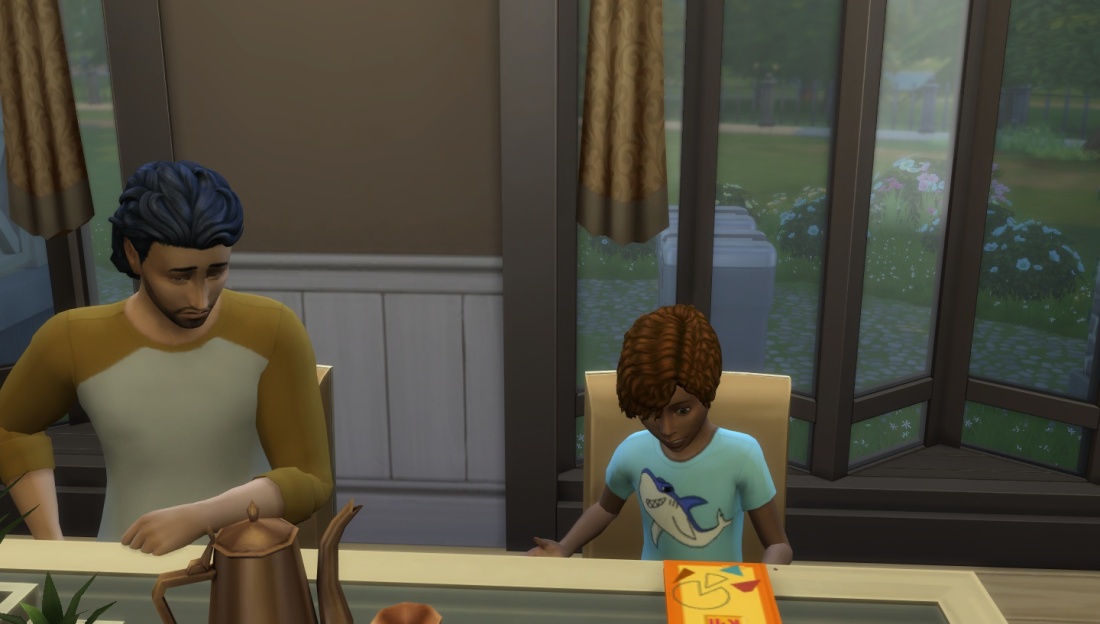 “I’m not done!” Elias cried, covering his workbook with his hand.

It didn’t matter. Lachlan had seen enough. At least Eli was voluntarily doing homework, but the rest of it worried him. He took the seat next to his son. “Maybe leave it for now, Eli…we should-”

“I have to.” Eli softly protested. “The triplets are gonna get really good marks and they’re gonna ask me ’bout it and I don’t wanna be bad!” he cried. 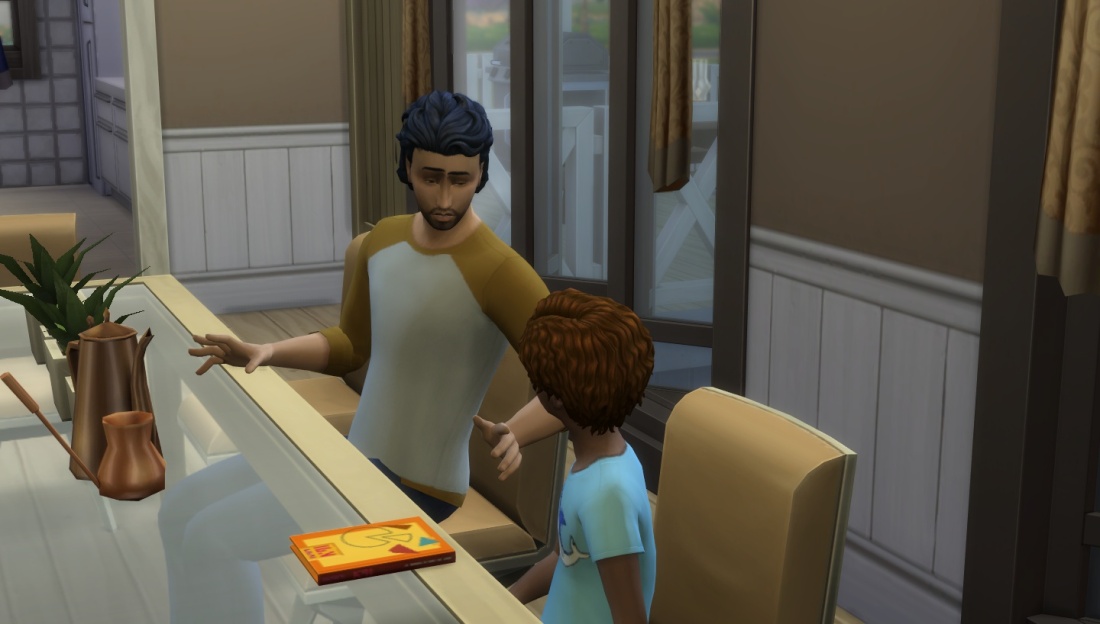 “You’ll never be bad.” Lachlan assured his son, patting him on the shoulder. “You’re trying very hard at this and I know you’ll get a good mark. And your friends aren’t trying to make you feel that way either. They’re just proud of their own marks-”

“It’s not like that though!” Eli wailed. He jumped up and started to run off. Lachlan immediately followed, pulling his son into a tight hug. “I don’t know how to write or do math good and they can all do both and they think I’m stupid!”

“They don’t think that. You aren’t. You’re a really smart kid, Eli. And sometimes you can’t write down your ideas as well as the other kids…but that doesn’t make you any less smart. Your mom and I know you’re amazing.” 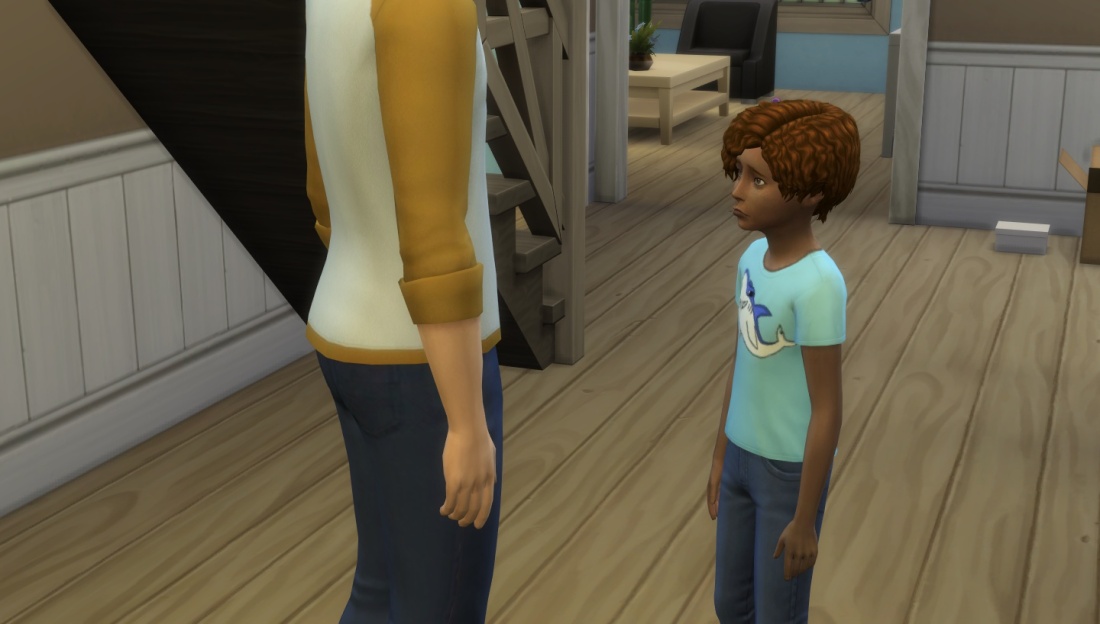 “Eli, having another kid doesn’t mean we love you any less – we love you and Farrah equally. I know it’s been a bit hard so far, but things will change. Farrah needs a lot of help right now ‘cos she’s so small, but she’s gonna grow up and we’ll have more time for you. I know we don’t do lots together since she was born but we didn’t stop loving you.” 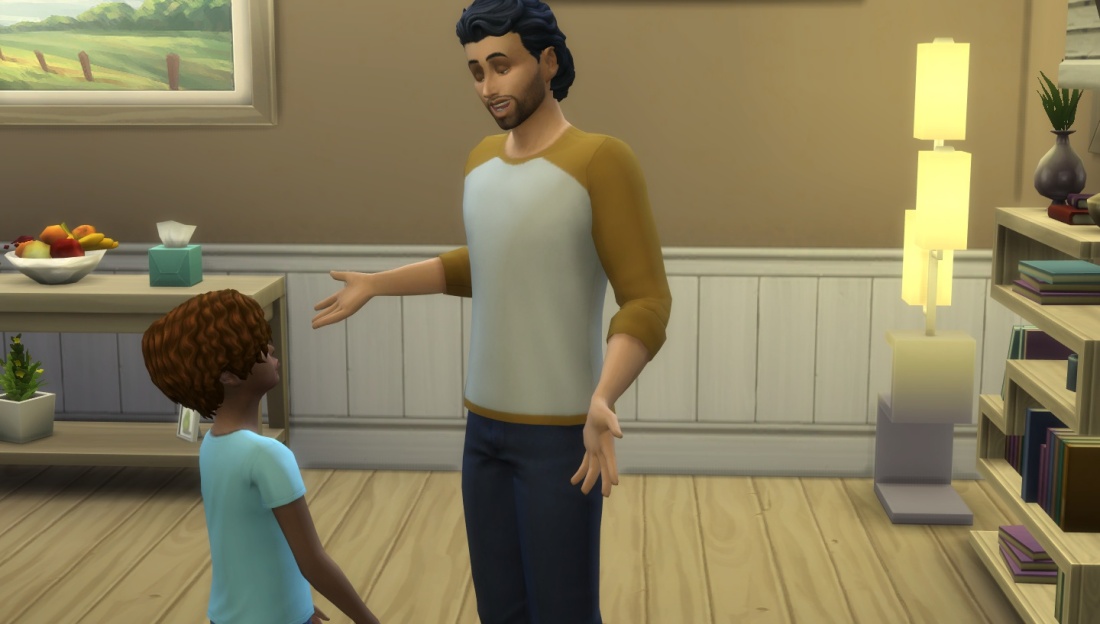 “Now,” Lachlan began. “Are you sure that’s what you want to write about? I don’t think it’s making you feel very good.”

“I don’t know. Nothin’ else has happened anyways.”

With a sinking feeling, Lachlan realised it was true. Eli’s weekends hadn’t been much fun for the past month. But it was only 1pm on a Sunday. Plenty of time to do something. “Again, I’m sorry, bud. We’ve just been very busy with your sister. But it’s not too late to find something. Maybe we could call your Auntie Dianne?”

“No!” Eli yelled, stomping his foot. “Don’t wanna go there.”

Lachlan raised an eyebrow. As far as he knew, Elias had been fine staying with Dianne and her boys when both parents had to work. “Are you sure?”

Eli shook his head and picked up the notebook. “It’s OK. I’ll just do the writing. Upstairs.”

“Hang on…is that a new notebook?”

“Yeah.” Eli quietly admitted, refusing to look his father in the eye. “Lost the other one.”

“No.” Eli answered almost immediately. Lachlan resolved to talk to his son’s teacher about that one. Eli lost everything, it seemed. The problem was only getting worse.

Lachlan gave a heavy sigh. “He is, sunshine. He’s written all this stuff about how he hates Farrah and we lied to him about what it was gonna be like.”

Sarai looked stricken. “Oh…have we done something wrong? I tried so hard to explain it right…but he’s still so young!”

“He’s having a hard time with Farrah. He’s so upset he won’t let me call Dianne, or Bart. He doesn’t wanna see other kids right now, I guess.” 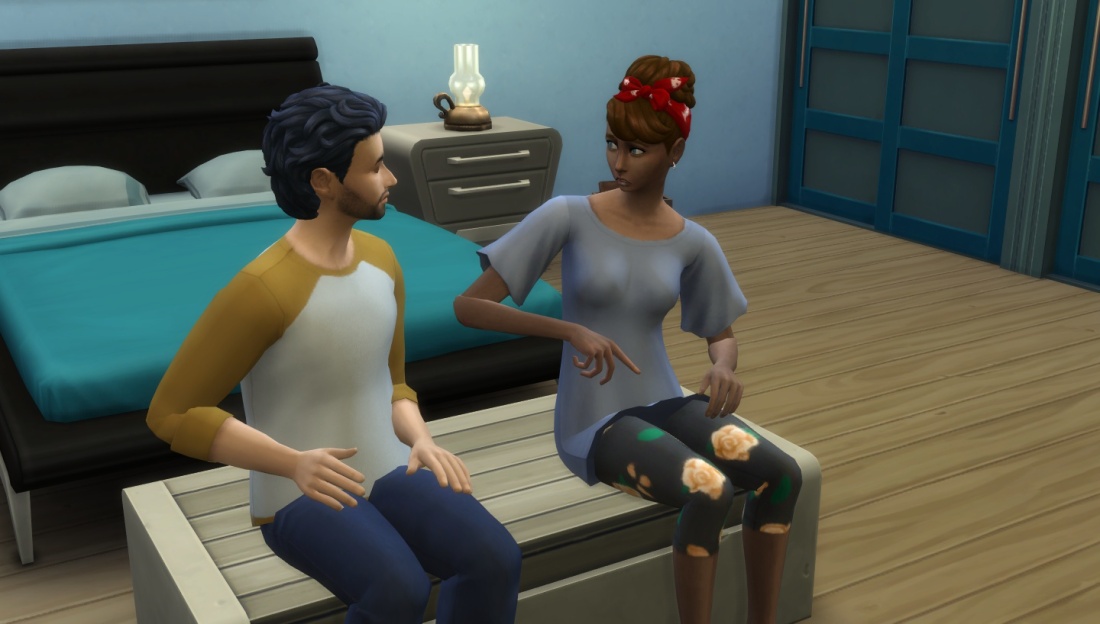 “Well…Colton’s so much older. And from what I’ve seen Caleb can be a bit loud for our Eli. And he really doesn’t have much in common with those tiny geniuses!” she replied, shaking her head at the mention of the Freeman triplets.

“He normally likes them…” Lachlan considered. “I guess six-year olds are pretty changeable, so-” He cut himself off when he saw his wife’s tears. “It’ll be ok, ‘Rai. He’ll get used to Farrah-” 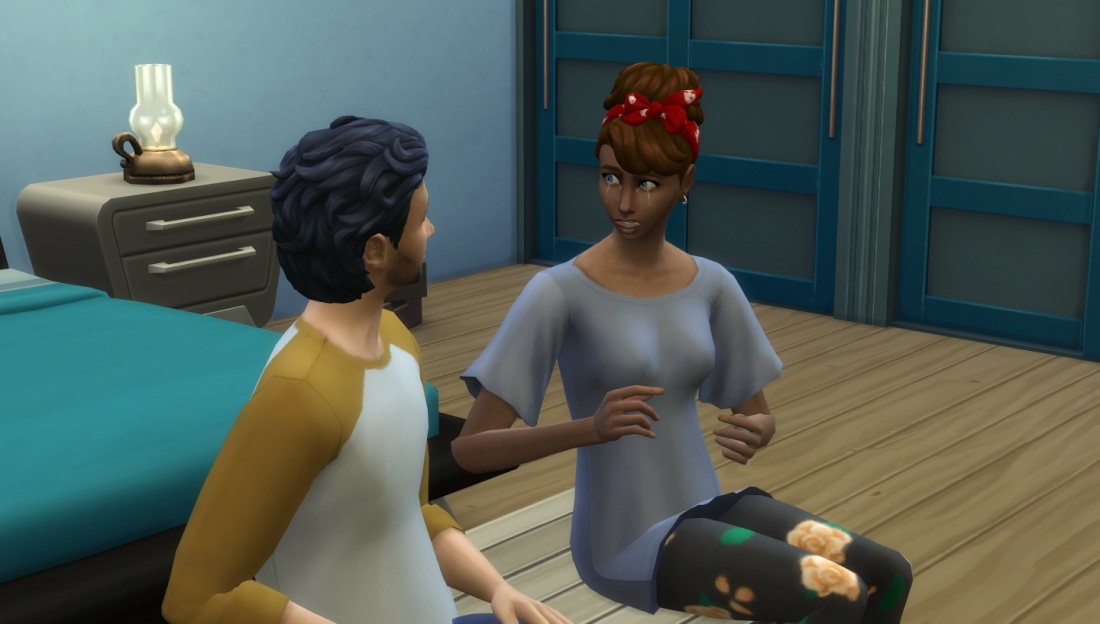 “What if he…he doesn’t think he’s good enough to be with his cousins and the triplets?” Sarai whimpered.

“The thought crossed my mind as well.” Lachlan admitted. “But I think we’re projecting. He’s a happy kid most of the time. I think he’s just adjusting.” 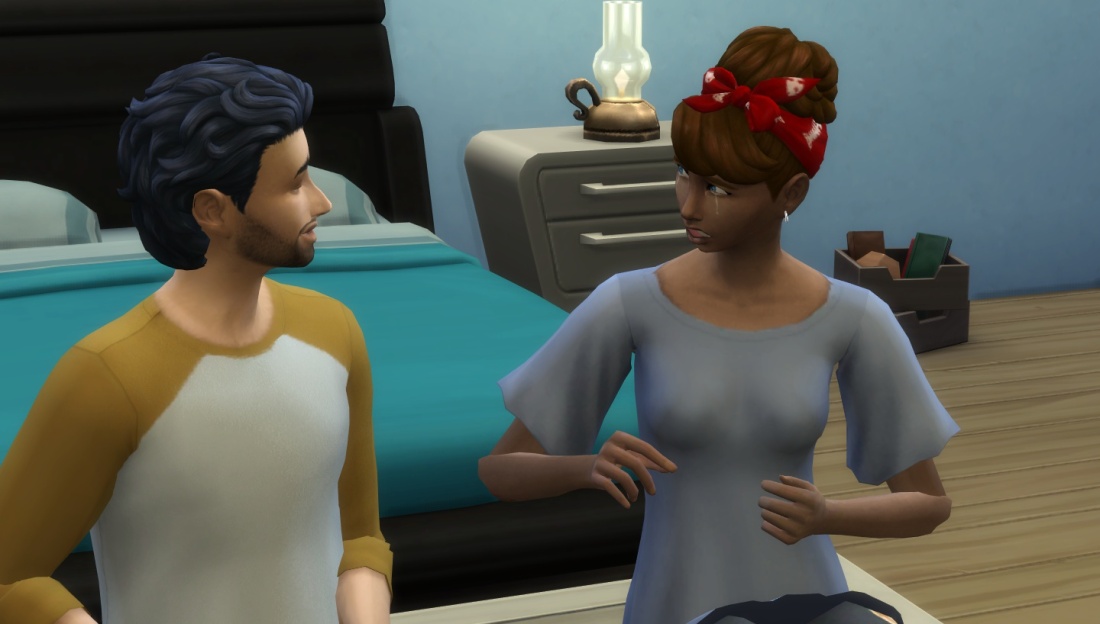 “He better be. He can’t grow up feeling like we did.” Sarai wiped her eyes. “But I think you’re right, it’s just – stupid hormones.”

“It’s not like you had a baby a month ago.” Lachlan joked.

“Maybe we can put him in sports.” Sarai suggested. “I know Di already takes Colt and Caleb. She wouldn’t have to watch him for the whole evening on Tuesdays and Thursdays…” 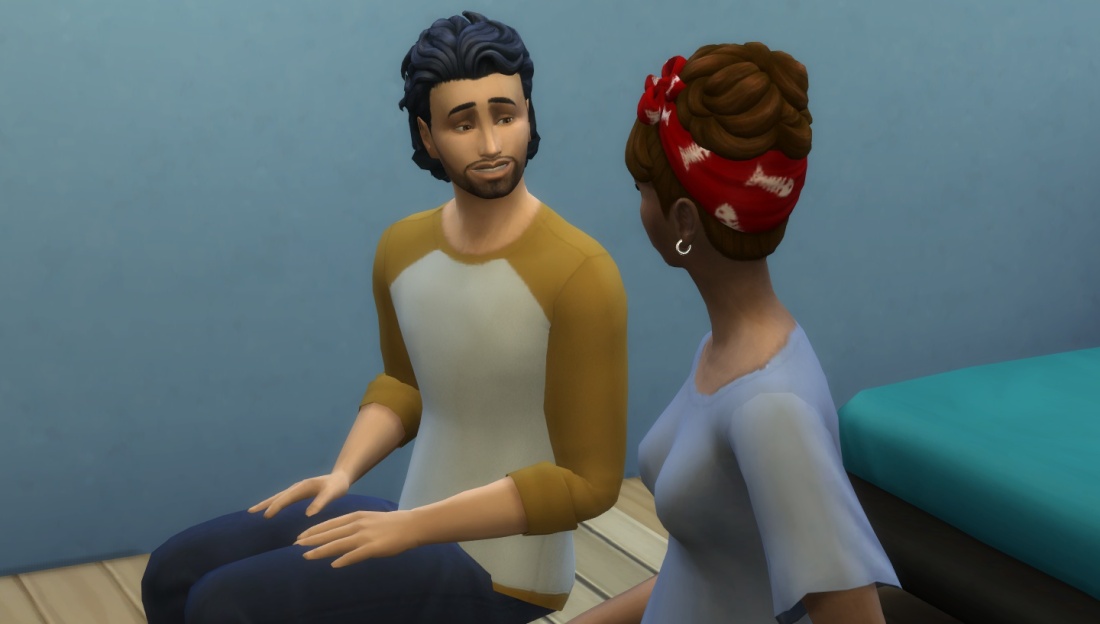 “It’ll focus him too hopefully, the kid never remembers what he’s doing! I don’t know who taught him to use the microwave but I’m getting sick of opening it to see cups of forgotten milk or old chicken nuggets!” Lachlan exclaimed. Sarai giggled.

“Yes, I think we’re doing what we should be, with him.” she considered, sighing. “I just hope it’s enough.”